The military intervention and regime change in Egypt Wednesday followed weeks of massive civil protests against the year-long rule of Mohamed Morsi and the Muslim Brotherhood.Palestinian analyst and author Nassar Ibrahim reviews what impact this change may have on the Israeli-Arab conflict, Palestinian reconciliation and the possibilities for peace between Palestinians and Israelis. 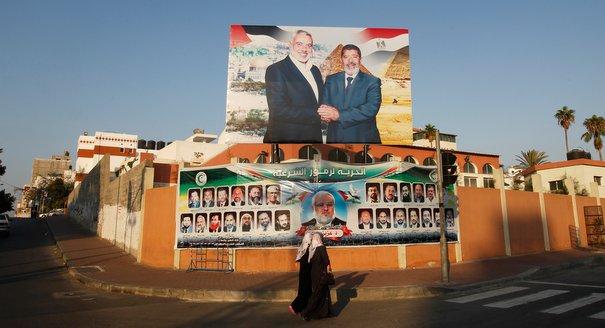 Hamas leadership will now pay a price for functioning as a branch of the Muslim Brotherhood movement (Photo: Carnegie Institute)

What impact did Morsi's short rule in Egypt have on the Israeli-Arab conflict and specifically on the Palestinians?

This question requires a deep analysis concerning how the Muslim Brotherhood reached power in Egypt. Established in 1928, the Muslim Brotherhood has long presented itself as an alternative to the existing political orders, which in Egypt meant amongst many things expressing opposition to the alliances with American policies.

When the Egyptian people began protesting against the Mubarak regime in January 2011, the Muslim Brotherhood waited on the sidelines to see how things would develop. When they understood the depth and seriousness of the protests they themselves took to the streets. The Brotherhood then utilised its excellent organisational and mobilisation capacities to become the leading force in the protests.

The United States intervened rapidly and strongly in Egypt at this time, working to keep any and all future changes under its control. The US made "agreements" with the Muslim Brotherhood before and during Egypt's May 2012 presidential elections. These agreements were reflected in the Brotherhood's statements about how it isn't against the west and would maintain the peace agreement with Israel. This move, of course, was supported by previously existing American ties with the Egyptian army. The US also pushed the World Bank to further tie Egypt into its policies and conditionalities.

The United States was the primary external power supporting the Muslim Brotherhood's rise to power in Egypt.

Already in March 2011 I identified a number of challenges facing the Egyptian revolution, challenges which we now see Morsi's government was unable to address. These challenges include establishing the foundation for a truly democratic civil society and rebuilding Egypt's role on the Arab, regional level.

Morsi's government didn't develop a strategic plan for addressing Egypt's economic and social challenges, preferring to move externally and not internally. The "answers" provided by Morsi were grounded in an alliance with the United States and its socio-political and economic policies, even though such "answers" had been tried and failed under both Anwar Sadat and Hosni Mubarak. Morsi didn't look for new answers, for example at the experiences of the BRICS states.

Following the Egyptian elections, the United States began to use the Muslim Brotherhood to serve its Middle East strategy, first and foremost as a way to control the Palestinian resistance. We saw this clearly during and following Israel's November 2012 attacks on the Gaza Strip. Morsi was the mediator for a ceasefire with Gaza, successfully pushing Hamas in Gaza to act as a branch of the Muslim Brotherhood and less as a Palestinian resistance movement. Egypt began closing the smuggling tunnels between Egypt and Gaza, a lifeline for the besieged Gazan population. Morsi also pushed Hamas to end its alliances with Syria, Hizbullah and Iran, to move closer to both Turkey and Qatar.

Finally, Morsi began to encourage a sectarian culture in Egypt and the region, a culture in which regional problems are distorted and presented as problems between Shia and Sunnis, for example. Encouragement of such a culture is also an American strategy to better control the situation in the Middle East.

Since the beginning of the so-called Arab Spring, Israel has presented itself as an island of stability in an unstable and unknown Middle East. This message seems to be accepted by many.

Israel claims it is stable, but violence and instability are tools used by it and the Americans in the Middle East, primarily against regimes which oppose the US strategy. In any event, calm and quiet in the Middle East will not strategically serve Israel. If anyone thinks that 300 million Arabs will continue to be silent while Israel and its allies interpret this "calm" to mean they can forever do what they want, this is a problem.

The Palestinian issue, regardless of its expression by Arab regimes, is a cornerstone for peoples in the Middle East. Israel must see that the changing Arab world will eventually reach this question, whether Israel wants to or not. Israel must face a strategic question: will it continue occupation or find way to be in Middle East, among the Arab world.

People in Egypt are now busy with internal questions, but the next ruling power will be asked about its external polices. People won't remain silent about this. What is your approach to the economy, social issues, relations with Israel and the suffering of Palestinian people? No one in the Arab world can escape the Palestinian question. Perhaps the current moment isn't suitable for in-depth discussion on this, but the issue won't go away. If the new regime in Egypt doesn't deal with these big issues, the social unrest will continue.

How can a Palestinian-Israeli peace process move forward in the current conditions?

Israel's strategy is to move within the peace process step by step, to sign agreements with individual countries. Egypt, Jordan. Tactically this sounds good, but it reflects the failure of Israel's strategic thinking. Israel deals with the Israeli-Palestinian conflict as a limited one, yet at its core this is an Arab-Israeli conflict. The existence of Israel is not related only to the Palestinians but to all the Arabs. Any peace process must thus involve a comprehensive approach to the region as a whole and not refer to countries as isolated islands.

Camp David is a good example. While there is a formal peace agreement between Egypt and Israel, it failed to change relations between Egyptians and Israelis. The same with Jordan - there is a peace agreement, but no peace between Israelis and Jordanians. Israel believes it controls the Golan Heights, but the conflict in Syria highlighted the problems of this belief. Israel puts tremendous pressure on the Palestinians, but this doesn't work.

Peace in the Middle East must necessarily involve a comprehensive process, and continuing to go piece by piece will not lead to a solution. I believe Israel will continue this approach, which will fail. Justice and a real peace are required, not only for the Palestinians. If an Israeli agreement with the PA isn't accepted by the Arab world, it will fail whether A

Where is the PA within these changes in the Middle East? How do these changes impact the PA relations with other Arab nations and the place of the Palestinian struggle in the Arab agenda?

This question raises the current problems of the Palestinian national movement. Despite all the radical changes in the Middle East, the PA continues to move as if nothing has changed. It continues its failed approach of relying on the United States, the EU. The PA doesn't think how to harness the regional and global changes in order to situate the Palestinian question within the changing context. All other countries in the world are using changes in the Arab world to advance their political goals but the Palestinians, who most need a change, are doing nothing. for example russia china The Palestinian leadership acts as if world changes are occurring on the moon.

The Palestinian leadership has given no signs of how it may use these changes. Hamas shifted from a resistance movement to be a tool of the Muslim Brotherhood while Fatah continues with its US-focused approach.

Internal change is needed within the Palestinian leadership to use changes in the Middle East. We don't have a national strategy at the moment. We are split between Fatah and Hamas, have no clear relation with the Arab world, no political strategy of what to do if the peace process fails and occupation continues. There is talk about going to the UN, of popular resistance. These are tactics. There is no strategy of how to rebuild Palestinian unity. How to structure a new network in the evolving Middle East. How to rebuild the PLO and harmonise its role with the PA tasks of national liberation, development and social services. How to renew relations with the whole of the Palestinian people, including those not living here.

Political Islam has received a strategic blow in Egypt. This is also a blow to American Middle East policy, which allied itself with the Muslim Brotherhood. The Muslim Brotherhood is the primary political force within the opposition to Assad's regime in Syria. When he cut off diplomatic relations with Syria, Morsi made a critical error. This move may have been the last straw for the Egyptian military leadership, which made it clear that fighting the Syrian state was not a possibility.

Hamas finds itself in a difficult situation. Following the lead of Morsi, Hamas' government in Gaza also acted like a branch of the Muslim Brotherhood. How will the current leadership of Hamas rehabilitate relations with the new regime in Egypt, with Syria, Iran? Fatah and Abbas are in a stronger position now vis-a-vis Palestinian national reconciliation. Is Hamas ready to advance reconciliation in these new conditions?  While the changes in Egypt may facilitate more flexibility for both Fatah and Hamas, national reconciliation is a complex process related also to the role of western powers and the global economy.

The change in Egypt has potential for a positive influence on the Israeli-Palestinian conflict. Egypt is a leader of the Arab world and absence of its leadership left space in recent years for leadership bids by Turkey and Iran. If Egypt succeeds to reclaim its role as leader of the Arab world, it can support Palestinian resistance and oppose Israel's monolithic approach to peace talks, an approach which has all but ended the peace process.


Palestinians and Israelis alone cannot and will not decide the future of the Middle East, however, whether they reach an agreement with Kerry or not.