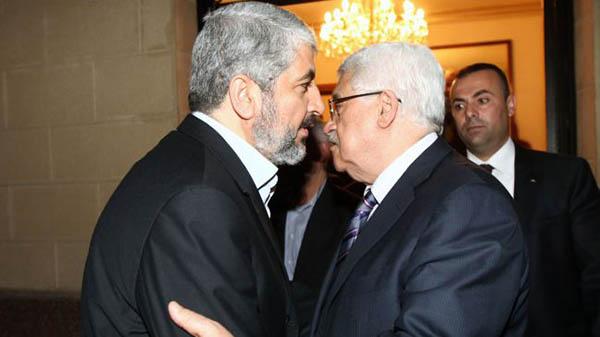 Hamas' leader Khaled Meshaal (left) and PA President Mahmoud Abbas (right) have not succeeded in bridging differences, resulting in the lack of a Palestinian national strategy. Can the left make a difference? (Photo: PressTV)

The Palestinian reality is witness to a deep crisis at various levels. This crisis manifests primarily in the continuation of Palestinian internal divisions and the failure of all attempts at reconciliation; continuation of Israel's blockade of the Gaza Strip; the shuttered window of the peace process in light of Israeli intransigence and continued settlement policy, especially in the besieged occupied Jerusalem; the various ongoing attacks against the Palestinian people; Israel's denial of the Palestinian national rights, including the right of return for Palestinian refugees; the economic crisis and the rising unemployment and poverty rates, especially amongst Palestinian youth ; the strategic changes in the Middle East and the consequent change in the balance of power, particularly in regards to what is occurring in Syria and Egypt, and the associated religious and sectarian polarisation and rising regional violence.

This reality, with all its aspects, places Palestinian political forces before serious questions and challenges, primarily concerning the  absence of a Palestinian national strategy based on a balance and harmony between the tasks of national liberation in order to end the occupation and achieve the Palestinian people's aspirations for freedom and independence, together with the tasks of internal social and political construction to meet the economic, social and development rights and needs of the Palestinian people.

First: The aggressive and racist policies of the Israeli occupation against the Palestinian people on the political, economic and social levels;

Second: The internal Palestinian division and  the political and social polarisation  process between Fatah and Hamas. The consequence of this division is a crushing of Palestinian unity politically, socially and geographically, in addition to  a disabling of the institutions of the Palestinian people, both of the PLO and the Palestinian National Authority.

Based on these facts, for Palestinians as individuals or as a people, the entryway to approach and assess the role of the Palestinian left in particular, and the role of the Palestinian political forces in general, is not the question of participating in elections or not. This is because Palestinians have tried elections more than once, discovering through this process that the nature of the challenges they face is not resolved by elections. The majority of Palestinians have become firmly convinced that so-called democratic elections, which have been confined to legislative elections, are a hoax given how the powers which politically control the region also control the flow of international aid to the Palestinian Authority.  When the United States, Israel and European countries saw the results of the 2006 Palestinian Legislative Council elections, in which Hamas won a majority of seats, they boycotted the new (and democratically elected) Palestinian government and imposed economic sanctions on the Palestinian people. The Palestinians also see Israel's continuous blockade of the Gaza Strip since 2007, followed by its aggressive attack on the Gaza Strip in 2008 ("Operation Cast Lead") and in 2012 ("Operation Pillar of Defence").

Do the forces of the Palestinian left possess the ability and will to renew themselves? Are they able to formulate a unified strategy for the leftist forces in order to answer the burning political, social and economic questions facing the Palestinian people? Will the forces of the Palestinian left be able to present themselves as a political and social, cultural and resistance power in order to break the destructive polarisation between Hamas, with its social and cultural choices and approaches based on political Islam (currently in crisis in Egypt, Syria, Tunisia, Libya and Turkey) and Fatah, with its political, social and economic choices and approaches in the context of the neoliberal experiment?

So if the Palestinian left is not dynamic in initiating and  responding to social, political and cultural questions imposed by the Palestinian reality, what remains of this left?

Now is an historic moment for the Palestinian left to leave behind its ineffective status and if not, then these leftist forces will exit the stage of history's theatre. The Palestinian people is watching and suffering and sacrificing, while simultaneously following  what is happening in the Arab world and internationally. The Palestinians know deep down that the political forces of various parties are incapable of dealing with this historical moment.

This is an opportune moment for the forces of the Palestinian left, as the representatives of the internal Palestinian division and polarisation (Fatah and Hamas) are living a deep crisis, the options and choices of which pushed the Palestinian people and their rights into a dangerous corner. Hamas is experiencing a real crisis in light of the crisis generated by the choice of political Islam and its failures in Egypt and Syria, and Fatah  is in a crisis following the failure of its political project in Oslo and its bet on the American role, as well as the failure of its economic choice stemming from the neoliberal approach and conditions of the World Bank.

This is why it is an appropriate moment for the Palestinian left to present its alternative and new strategy, but this is conditional on its ability to present a comprehensive reading of the regional and global political changes taking place and their impacts on the Palestinian issue. The left must also renew its socio-cultural vision and role, which defends the rights of the majority of the Palestinian people who are currently paying the price of the policies of the reactionary religious and neoliberal forces.

Now is the moment for the Palestinian leftist  forces to renew and promote their political, social, economic and cultural programme, a programme which can exceed the option of political Islam as posed by Hamas at all levels, as well as that of the Fatah movement, which has also been politically, economically and socially exposed.

The leftist choice or alternative to which I'm referring here is the alternative that can  move dynamically toward the interrelated Palestinian questions, while simultaneously acting as an integral part of the pan- Arab national progressive and democratic movement, which constitutes the Arab world as one  political, social, cultural and economic framework.

Such an approach is not optional but an objective and rigorous requirement, because Palestinian resistance is a natural part of the pan- Arab system of resistance in the face of the colonial system forces in the Arab world.

This choice, in which Palestine is its centre and the Arab world its incubator, moves naturally through the global context and is clearly biased against the domination, exploitation and oppression systems of savage capitalism via its political, economic, cultural and social systems. Such a choice firmly positions the Palestinian struggle within the progressive and democratic movements all over the world.

Completion of this process is not easy. It is a tedious process by all theoretical and practical standards, requiring from the Palestinian leftist forces a true process of evaluation, criticism  and analysis in order to see the movement of reality and the different strategies and interests. Such a process must also include a renewal and self-construction of these  forces, so they can regain their lost role and reconnect to the  political, social and cultural realities as the only reference for action and influence.